Zhang Jie, Member of the Academic Committee and Senior Researcher, the Grandview Institution; Director of the Department of Asia-Pacific Security and Diplomatic Studies, the National Institute of International Strategy, the Chinese Academy of Social Sciences 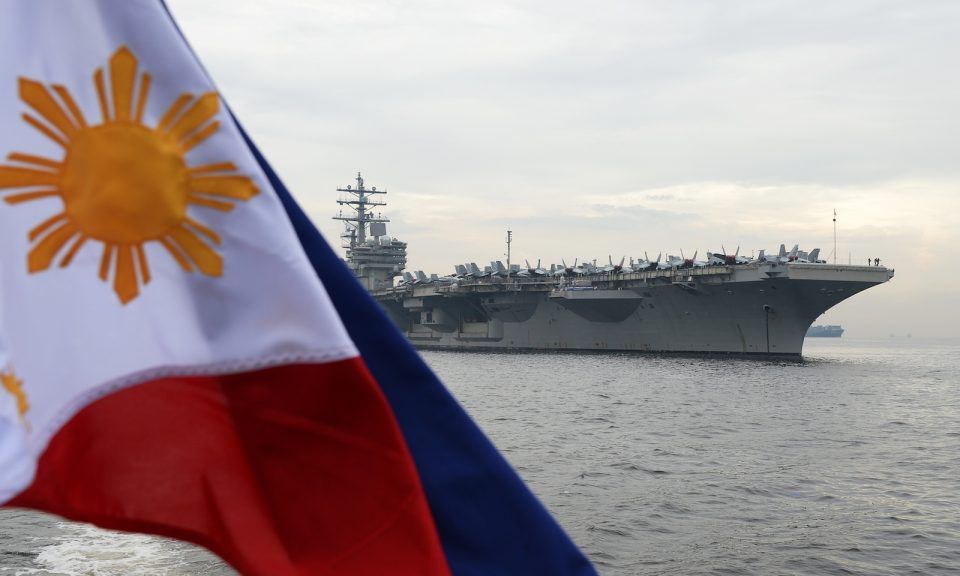 The Australian Institute of International Affairs holds that Duterte’s belief in his so-called “independent foreign policy” reflects the fact that the Philippines is gradually moving away from its previously close alliance with the United States. But the Philippines still don’t trust China. At the same time, the opposition within the government also opposes Duterte's unrestrained attempts to strengthen relations between the Philippines and China and is wary of China's influence and intentions.

Early in Duterte's presidency, Philippines' diplomatic route was once considered to be "Supporting China and alienating the United States." However, since the second half of 2017, the US-Philippine relationship has seen a recovery. In fact, their relationship has never changed substantially, and they will maintain close alliances in the future, especially in the military field. Besides, with the “Indo-Pacific” strategy concentrating on both the economic and security fields, the United States is trying to join forces with Japan and Australia to provide “alternative” infrastructure construction funds for the Indo-Pacific region, which may squeeze the strategic space of China in using economic measures to ease and improve its relations with the Philippine side. 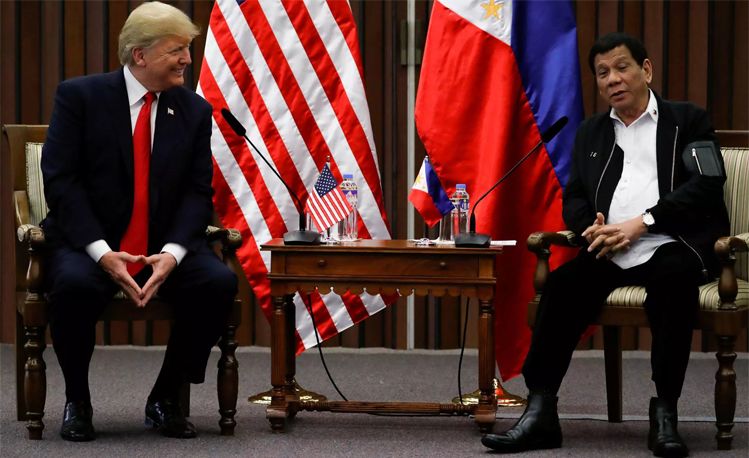 The relationship between the US and the Philippines during Duterte’s presidency can be divided into two phases. In the first phase (June 2016-July 2017), the relationship between them has experienced major ups and downs. This is mainly due to the Obama administration’s severe criticism of the Duterte government’s use of “extra-legal law” to crack down on domestic drug trafficking. So, diplomatically, the two governments broke out war of words, and in terms of defense affairs, Duterte once asked the US military to withdraw from Mindanao, announced the cancellation of the US-Philippines joint cruise, downsized the 2017 US-Philippine “side-by-side” military exercise and reduced the sensitivity of the exercise subjects.

However, this phenomenon was ended rapidly. Since the Philippines has to rely on the US for internal security (issues of southern separation and terrorism) and external security (South China Sea issue), after July 2017, the relationship between them has not only returned to normal, but even been further improved, proofed by the construction of the Barcelona Air Force Base in April 2018. According to the Enhanced Defense Cooperation Agreement, this base is one of the five Philippine military bases that can be used by the United States. In 2018, the US and Philippine "side by side" military exercise resumed its scale and focused more on the South China Sea issue. Besides, Japan, Australia and the UK also participated in the exercise in different forms, indicating that the US intends to gather allies to promote the implementation of the "Indo-Pacific" strategy. In addition, the US not only supported the Philippine side to end the Malawi rebellion, but also announced to extend the Mindanao Peace and Development Assistance Agreement, adding about $10 million support to the Philippines.

Of course, the military alliance is also a double-edged sword for the US and the Philippines, for both sides are preventing themselves from being utilized and bonded. Particularly, in terms of the US-Philippines Common Defence Treaty, the US has always been ambiguous about whether to include the disputed waters of the South China Sea into its scope. Besides, the US also tried to restrain the Philippine side’s excessive behavior. It is reported that before the announcement of the South China Sea arbitration ruling in June 2016, the then US Defense Minister Carter specially called the Philippine Defense Minister and asked the Philippine side not to take imprudent actions on Huangyan island even if they got a favorable ruling.

In the future, the strategic value of the Philippines will be strengthened in the implementation of the “Indo-Pacific” strategy. In 2018, the US "Indo-Pacific" strategy has moved from conceptual conception to program implementation stage, gradually being concrete, building its own mechanism, and becoming a grand strategy for the US to reshape the regional security agenda and maintain its regional leadership. In this process, some people in the US and the Philippines continue to preach the strategic value of the Philippines and position it as a key point of the “Indo-Pacific” strategy.

The military alliance is an important force for the US to promote the "Indo-Pacific" strategy. After Duterte took office, the relationship between the Philippines and Japan developed rapidly. Japan has not interfered with the anti-drug actions of the Duterte government on the grounds of human rights. Besides, Japan and the Philippines also reached an agreement in 2017 that Japan will provide 1 trillion yen to support the infrastructure construction of the Philippines within five years. In the future, Japan will be an important partner of the US in implementing the economic policies of the "Indo-Pacific" strategy in the Philippines.

The US-Philippines relations maintain stable after upturns and need to tap into further cooperation potential.

After Duterte took office, China-Philippines relations have improved in all aspects, which played a positive role in stabilizing the South China Sea situation. This has indeed alleviated the regional and international pressures on China, and has brought the Philippines tangible benefits. For example, the Philippine fishermen are allowed to catch fish on the waters near Huangyan Island and the Philippines took the opportunity to re-establish the Nansha islands and reefs, which were illegal possessed by them. Therefore, the improvement of Sino-Philippines relationship is not the result of Duterte’s unilateral implementation of “Supporting China and alienating the United States”, but the mutually beneficial cooperation between China and the Philippines.

During president Xi Jinping’s visit to the Philippines in November 2018, the two sides signed Memorandums of Understanding in several fields, such as oil and gas development cooperation and joint construction of the Belt and Road Initiative. The two issues are the focus of their future cooperation.

Under the current stable situation, we should know that China-Philippines relations still face many challenges. According to the polls of the Philippine social institutions, although the Philippine people support Duterte's administration, they do not support Duterte's foreign policy of “Supporting China and alienating the United States”. The Philippine people believe that the Duterte’s government should openly oppose the militarization of China's islands and reefs, and strengthen the military power of the Philippines, especially the navy power. Besides, although more than ＄20 billion worth of Chinese investment intentions in Philippine have been reached since the bilateral relations returned to normal, the actual implementation is slow, mainly because the investment plan proposed by the Philippine side is not feasible. While the Philippines all blame it on China’s vain promise, which has also become one of the accusations of the Philippine domestic opposition forces against the Duterte government’s China policy.

From the perspective of the external environment, the US has proposed the "Indo-Pacific" strategy, which is known as providing "alternative" infrastructure investment funds for the Indian-Pacific countries. This provides the Philippine government with the bargaining power, so that they can ask China to offer more favorable investments. The strategy may also provide the Philippines with an opportunity to gain profit from China and the US, and to reduce the effectiveness of China’s investments in improving bilateral relationship. In this regard, China needs to find more ways to improve its relationship with the Philippines, instead of relying solely on economic tools.

To stable China-Philippines relationship, we should focus on bilateral cooperation and improve our own strength.

Implementing the balance of power strategy features the diplomatic policies in East Asia countries. Facing the current China-US game of regional order, Philippines and other countries try their best to choose no side. From the perspective of China and US, recognizing the important position of ASEAN and gaining support from ASEAN countries is the necessity of their success in regional game.

So, advancing Belt and Road construction and promoting economic cooperation is effective tools to improve China-Philippines relationship. It should be noted that, the depoliticized investment projects, which are profit-oriented and mutually beneficial, are sustainable and stable, even under the changes of the Philippines’ domestic politics and the bilateral relations. At the same time, we should conduct feasibility research on cooperation with third party countries nearing the Philippines, such as Japan, so as to partially ease the “Indo-Pacific” strategy’s impact on and strategic squeeze of the Belt and Road Initiative.

Regarding the South China Sea issue, in order to reduce the negative impact of China-US trade friction and maintain a stable surrounding environment, China should consolidate its achievements in construction and militarization of islands and reefs, instead of seeking development in all aspects. Fundamentally speaking, a proper dealing of the South China Sea issue holds the key to China-Philippines friendship and strategic integration of bilateral economic development.