The author is a Senior Journalist and a Doctoral Researcher.

“一带一路 / One-Belt One-Road” was rebranded in English as the Belt and Road Initiative (BRI) turn out to be China’s globalization dream coming true. From trade to building up infrastructure around the globe, this is a multi-trillion dollars project, this planet “EARTH” has ever witnessed by involving more than 145 countries. The Belt & Road is impacting greatly on the socio-economic growth as scholars suggest that there would be possibly two-thirds of the earth’s population can get benefited if the BRI project swings with full thrust.

To make it conceivable, China has had always a plan as BRI expanding so fast. Now, creating its way into the space. This was already part of the BRI plan termed as ‘Information Silk Road’ in the 2015 White Paper.

China is ready to take responsibility not only for Chinese communities but also for international communities, and this time the Belt and Road Initiative will be evolving in the space too.

On 23 June 2020, the last BeiDou satellite was successfully launched, completing China’s BeiDou Navigation Satellite System (BDS). “The U.S. was in the vanguard of this technology, launching the first satellite that now makes up the Global Positioning System way back in 1978. But GPS, long the only game in town, is being eclipsed by Beidou.”

The white paper document recently published - called China's Space Program: A 2021 Perspective by The State Council Information Office of the People's Republic of China - based on its made achievements (e.g., Global governance of outer space, completion and operation of #BeiDou, 400+ launch attempts, the conclusion of the last step of the lunar exploration program, first stages of space station construction, Tianwen-1) shall become a next space power in the world. 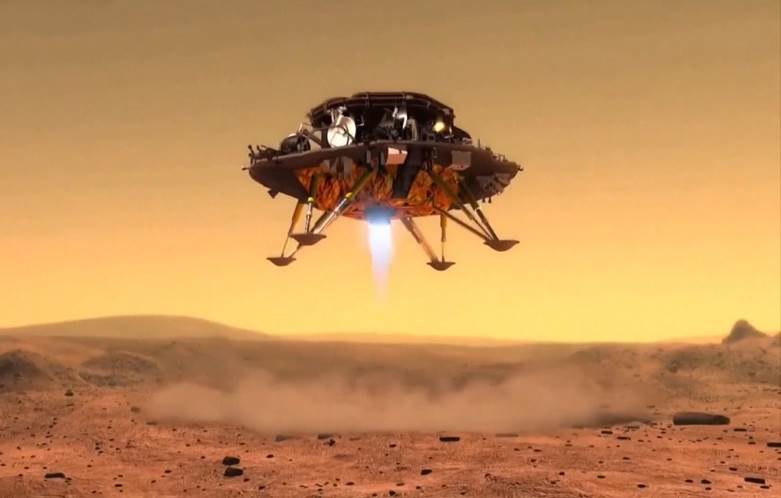 An artist's concept of the Tianwen-1 mission, China's first interplanetary endeavour. The lander, with China's first Mars rover Zhurong, successfully reached the surface of the Red Planet on May 15, 2021. [Photo/IC]

China has developed a unique and sustainable national space plan. According to the plan, China knows very well, how to make the space transport system that would be useful for spaceflight efficiently in the next five years.

China is not only keeping its eyes on the mars anymore but also wants to explore other space opportunities by setting exploration goals that include a goal to solve the challenges and bring Mars and Jupiter Mission with samples in the next five years.

China's space plan will expand research and development into space technology to strengthen the reusable space navigation system and will launch its initial test flights.

China will complete its space station in the next five years and set up a space laboratory, which will allow astronauts to conduct long-term scientific research and experiments. On April 17,  Yili Group and Chinese aerospace scientists launch Space Lab for Future Dairy. 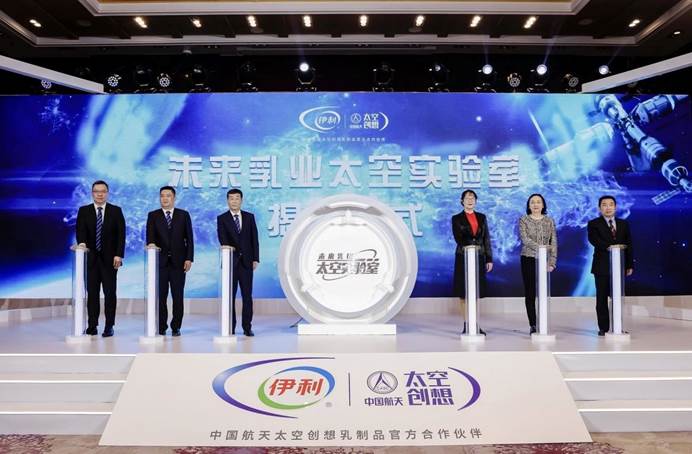 Yili is collaborating with CASC to upgrade the dairy industry through space technology (Photo Credit: Yili)

This announcement was made during a press conference to collaborate with the China Center for Aerospace Science and Technology International Communications (CCASTIC), right after a day China’s Shenzhou 13 crew returned to earth. The collaboration will include establishing a Space Lab for Future Dairy, which will aim to leverage space technology to bring new transformative innovations to the health sector.

Chinese spacecraft will land on the moon consistently soon, more samples about the moon will be collected for new research and experiments. It is possible that landing on the moon will be normal by then. At the same time, the limitations of the world's solar system will be investigated. Over the next five years, China will be able to develop spacecraft on a commercial basis in addition to the scientific and governmental level, by developing and launching pads for spacecraft on a commercial basis. It can also allow Chinese scientists to intensify the integration of satellite applications with the development of industries and regions, and space information with new-generation information technology such as big data and IoT.

Under the new technologies, China will also promote new innovations, including cleaning debris from space. While a system will be created through which space traffic can be controlled. China will also conduct scientific research in this regard, which could provide the world with a defense system in view of the threats posed by space. New Chinese space policy also suggests building an integrated space-ground space climate monitoring system and continuing to improve relevant services to effectively respond to catastrophic space climate events. The good news for those who question China's governance system around the world is that China has made significant plans to implement space governance and strengthen international space cooperation under the UN framework.

Other Belt & Road partnering countries, like Pakistan and other countries would be using the Application of BeiDou in transport and port administration; Established a regional Beidou Navigation Satellite system network, Belt & Road Initiative Space Information Corridor.

This project is very unique and based on information services being provided in the BRI countries. According to the Hui Jiang, 2019 “This comprehensive 一带一路 project also known as Space Information Corridor based on information resources and ground information-sharing network, and aims at realizing co-construction and sharing of space information in the Region.”

In his presentation, he further stated that the “Space Information Corridor can provide “four-in-one” space information service for countries along the Belt and Road, which integrates sense, transmission, knowledge and use, to realize interconnection and the intercommunication of the information.”

The United States of America has already separated itself from Chinese space activities as the U.S think they follow some different and much more modern space capabilities paths. Currently, both countries are stuck around with their inhibit policies over Space Technology Exchange. 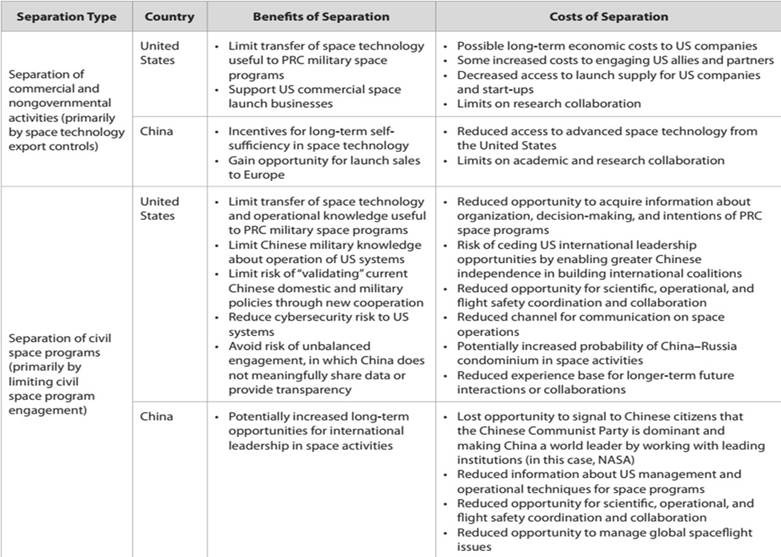 This Table on “Costs and Benefits of Maintaining Separation in Space Technology” taken from the National Security Report “The History and Future of U.S- China Competition and Cooperation in Space” by Mathew Daniel Copyright © 2020 The Johns Hopkins University Applied Physics Laboratory LLC. All Rights Reserved

In this report the Unites states of America and China’s Costs and Benefits of Maintaining Separation in Space Technology were discussed in a table that is shown above. Chinese way of innovation is unique with Chinese characteristics that is equally solid upright among western and reliable resources for investing in the world of Technology. Eventually, Space Information Corridor would bring revolutionary changes into the space under 一带一路. It shows that how Chinese capabilities are heading towards Chinese progress while reshaping the world accordingly.

on June 16, 2016, The State Council Information Office of the People's Republic of China released the white paper named “China’s BeiDou Navigation Satellite System” (BDS) was developed and mainly dedicated to the world to assist the progress of the "Belt and Road Initiative". China is committed to word with all the countries, especially the BRI countries, and international organizations to promote a global satellite navigation system for the benefit of humankind.

Countries along the BRI can be benefited from Chinese aerospace science and technology in the future smart city concepts, smart agriculture concepts, and high-speed train systems connecting these countries including drone and automatic driving abilities could be possible through Space Information Corridor.

The Space Silk Road has already touched a reality ground and can be seen next stage of implementation. More than 30 countries along the Belt and Road including Pakistan, Indonesia, Saudi Arabia, Myanmar have signed agreements on BDS. Belt & Road Initiative’s space corridors will be playing vital role in gaining higher share in The global navigation satellite system (GNSS) market is projected to grow from $175.19 billion in 2021 to $320.73 billion in 2028 at a CAGR of 9.02% in forecast period...

On April 2021, Global Navigation Satellite System (GNSS) - Global Market Trajectory & Analytics Report revealed that “The U.S. Market is Estimated at $42 Billion, While China is Forecast to Grow at 8.6% CAGR The Global Navigation Satellite System (GNSS) market in the U.S. is estimated at US$42 Billion in the year 2020. China, the world`s second largest economy, is forecast to reach a projected market size of US$47.8 Billion by the year 2027 trailing a CAGR of 8.6% over the analysis period 2020 to 2027. Among the other noteworthy geographic markets are Japan and Canada, each forecast to grow at 3.2% and 5.1% respectively over the 2020-2027 period. Within Europe, Germany is forecast to grow at approximately 3.6% CAGR.”

On 14 May 2018, Sebastian Ibold in his report mentioned 19 countries along the belt and road as “Selected Space Silk Road Cooperation” (own compilation). However, on June 15, 2020, a research paper “Chinese Aerospace Along the Belt and Road” by Rob Miltersen shared convincing data on Satellites launched by China for Foreign Countries Since 2012. 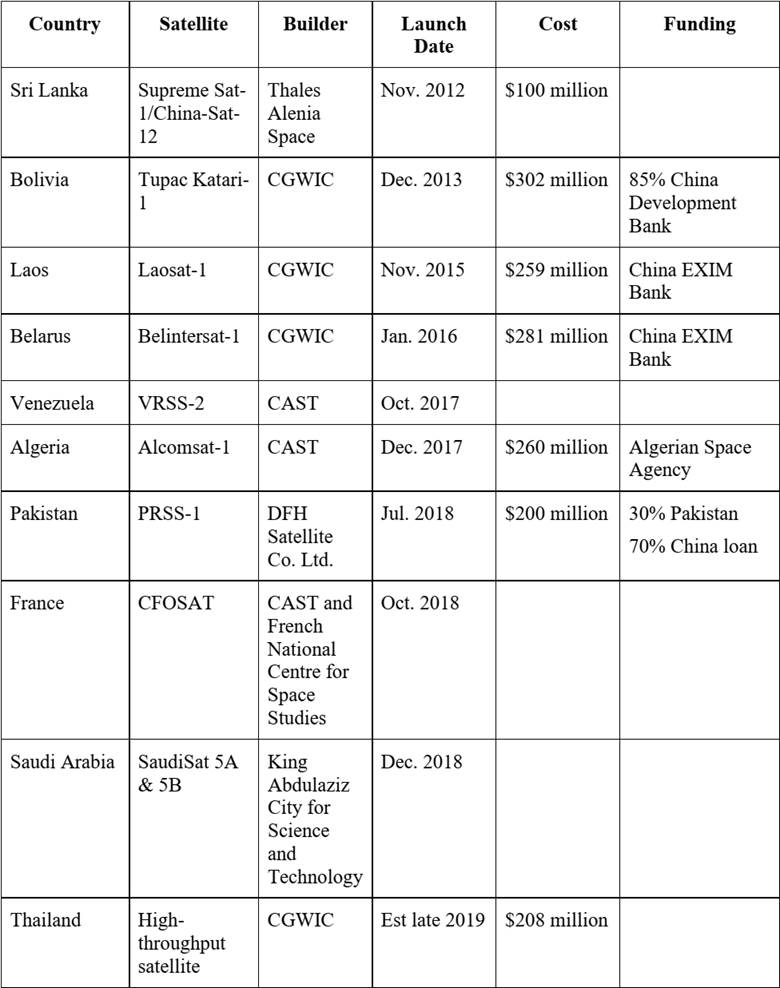 Chinese aerospace science and technologies are unprecedented in terms of Belt & Road’s Space Information Corridor. This strategy is so much global and has the ability to give a new digital governing system to the world and majorly to all the Belt & Road Initiative (BRI) partnering countries. This has become also an integral part of promoting BRI aerospace policy and strategy within the Chinese paradigm. There is no doubt about it that it may have many futuristic benefits for mankind. All we need to understand and accept its today’s existence for a brighter future.