South China Sea not a playground for US

(The artical was originally published on China Daily by Captain(Retd) Tian Shichen, Vice President at Grandview Institution, then held the pen name of Liu Haiyang) 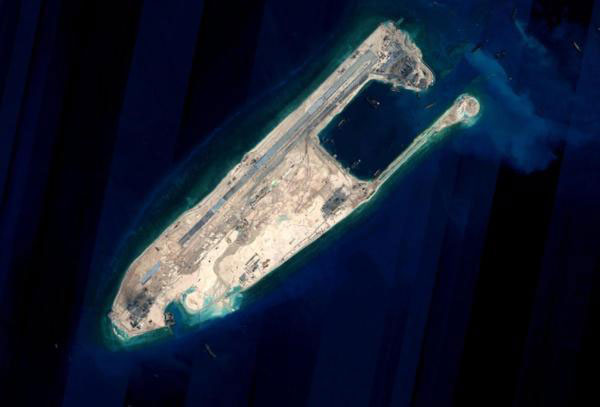 The United States has beefed up its military presence in the Asia-Pacific region, especially in the South China Sea, over the past months, apparently to challenge China's lawful claims.

US Defense Secretary Ashton Carter said recently that the Pentagon is "constantly evaluating" China's militarization of the South China Sea, stopping short of agreeing with a Hawaii congressman's proposal to withdraw the invitation to China to take part in a high-profile global naval exercise. This could be another trick of US politicians in their media war against China.

US political heavyweights, including US President Barack Obama, Secretary of State John Kerry and senior military officials - even some anonymous officials - have been pushing Washington's agenda against Beijing, which normally starts with the US military playing hawkish and ends with the government departments suggesting a softer diplomatic stance toward China.

As key elements of Washington's diplomatic PR, US scholars and media are given exclusive official information from time to time, allowing them to come up with targeted comments and reports against China's lawful territorial claims and construction on the islands and reefs in the South China Sea.

The US will make more such efforts to blow out of proportion the Philippines' bid for international arbitration on the South China Sea issue, in order to justify its increasing intervention in the region.

Of course, the US will not mention its refusal to accept the arbitration on its military and paramilitary intervention in Nicaragua in the 1980s. Instead, it is expected to cite more convenient excuses to overstate bilateral and regional disputes, most of which involve China, as major international issues to intervene in the region's affairs.

The root cause of the escalating tensions in the South China Sea is Washington's "pivot to Asia" policy and its increasingly aggressive military deployment in the region. Beijing's defense-oriented actions in the East and South China seas, in comparison, are only to keep the possible provocations from Japan and the Philippines at bay.

By accusing China's anti-ship ballistic missiles of being a threat to US aircraft carriers just because of their range, many US scholars are missing a crucial point: that many cutting-edge weapons which Washington has stockpiled are capable of destroying targets anywhere in the world.

China has been, and will remain, a staunch advocate of peaceful development and defensive security strategies, without having anything to do with the aggressive policy of "might makes right" in disregard of international law, as Obama hinted in a recent interview.

Similar accusations against China's so-called violations of international laws are vague and baseless, because China's construction on its own islets and reefs is not against any international law. Likewise, about half of the world's commercial vessels pass through the South China Sea every year, and their passage has never been impeded because of navigational freedom disputes, and thus the US' accusation doesn't hold water.

Although Beijing has every reason to reject arbitration on the South China Sea issue, its refusal has always been misinterpreted as a violation of international law. Therefore, it's time China fought back with more effective means.