Fazal Gilani: An Agreement that Could Have Stopped Russia’s Special Military Operation in Ukraine!

The author is a Senior Journalist and a Doctoral Researcher.

With the interest in multiple areas, Russia and the United States of America’s forces are improving their sustainable strength. This strength could be in all terms like, economical, demographical, political, and societal but military strengthening is much more important for both countries to be gained in the coming years.

Russia asked the United States and NATO to respond in writing and demanded not only by stressing the "neutralization of Ukraine", but also NATO ensures that it will no longer accept new members and return the current military layout to the state of 1997.

However, in response to this proposed agreement by the Russian Federation, the United States of America also issued a letter to Russia which has never been published anywhere except some of the content leaked by a Spanish Newspaper El PAIS on February 2, 2022. (Zhiyuan, 2022)

In its reply, The United States and NATO reject signing a bilateral agreement on security in Europe with Russia. Spanish newspaper understood from the leaked content of a reply letter to Russia that the United States will not be asking NATO from accepting new members and return the current military layout to its originated position of 1997. However, the United States of America can discuss the “indivisibility of security” and proposed a series of mechanisms to gradually build mutual trust. According to the EL PAIS newspaper, “Washington and the Alliance offered Putin negotiations on disarmament agreements and trust-building measures in different forums, such as the Organization for Security and Co-operation in Europe (OSCE), the US-Russia Strategic Stability Dialogue, and the NATO-Russia Council the success of which is conditioned on the start of a de-escalation of the Russian military threat to Ukraine”. President Putin did not reply after receiving the letter from the United States, referring to the fact that NATO's reply was not exactly the same as that of the United States, because NATO had not expressed its willingness to negotiate with Russia on the concept of "indivisible security" So in a reaction to the contradictory responses - Russia launched "special military operation" against Ukraine.

The term “indivisibility of security in Europe” was included in the Helsinki Final Act of 1975,

“Recognizing the indivisibility of security in Europe as well as their common interest in the development of cooperation throughout Europe and among selves and expressing their intention to pursue efforts accordingly; Recognizing the close link between peace and security in Europe and in the world as a whole and conscious of the need for each of them to make its contribution to the strengthening of world peace and security and to the promotion of fundamental rights, economic and social progress and well-being for all peoples.”

(CONFERENCE ON SECURITY AND CO-OPERATION IN EUROPE  FINAL ACT, 1975)

It was so fast and the well-prepared special military operation launched by President Putin. Russia didn’t wait further for more talks or letters exchanges as maybe President Putin well understood the U.S & NATO’s wordy game. It also shows clarity of President Putin’s vision of the Ukraine operation that there would be not a solution to the long-discussed issue and Russia should take the situation into her hands with a military operation in Ukraine, I am to some extent sure that this would have triggered Putin and his operation cabinet to tackle Ukraine without further delay.

On the 4th of March President of France Emmanuel Macron posted on his Facebook page that he has spoken with Putin, who refuses to stop operations on Ukraine at this point.

On the 8th of March, He again posted that The German Chancellor and I spoke to the Chinese President this morning about the tragic consequences of the operation in Ukraine. President Xi supported our action towards reaching a ceasefire and ensuring the people have access to humanitarian aid. 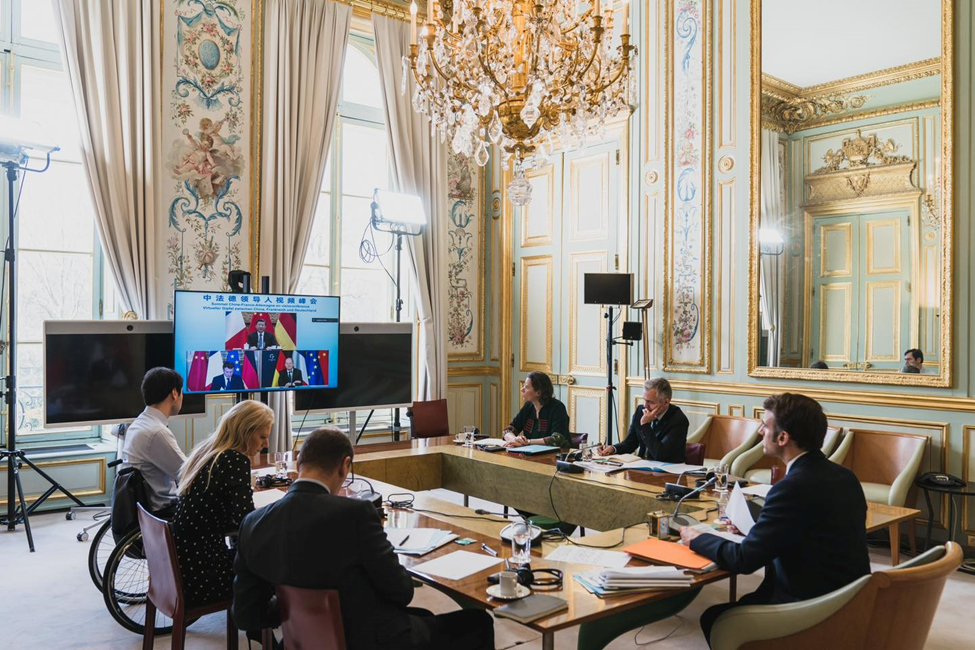 I still do not rule out that after Russia reaches a truce with Ukraine, it is still possible to gradually establish a mutual trust mechanism with the United States and NATO, so that the "security paradox" will not escalate to much into a world’s another bloody war. It was difficult for the west to convince Moscow of their need for NATO and its expansion. Russia never accepted the idea and always react to NATO’s expansion which undermines its national security. (Zhiyuan, 2022)

The United States of America with its military allies tried multiple times to get agreed with Russia and NATO on a mutual consultation mechanism on NATO’s expansion, but Russia never accepted with clear cut “NO” Policy, NATO expansion has already brought reflectively changes in the western neighbors as well the U.S with Russia in the post-cold war.

I don't think Russia will allow any more compromise on its national security. Russia has called for an operation on Ukraine in order to deter NATO, including the United States and its western allies. President Putin is seeing there has been a big created gap which could be a severe threat for Russian national security, decided to immediately target Ukraine. Due to this, the world and especially, Europe could lead to a catastrophe. We should remember this as well that Putin thinks Ukraine was created by Russian Federation, not by any other entity and it was the best time for Putin and his operation manglers’ cabinet to crush not only NATO’s eastwards expansion, also to get back full control over the lost Soviet Union.