On April 7, 2018, Global Ocean Governance Series 1st Dialogue was successfully held jointly organized by the Grandview Institution and China Ocean University. The dialogue will be based on the theme ‘The Development Trend of Global Ocean Governance in the New Era and the Role of China’, discussed topics including global ocean governance experience and dilemma, China ocean governance status, opportunity of blue economy in small islands developing countries, the role and pathway of China participate in global ocean governance. 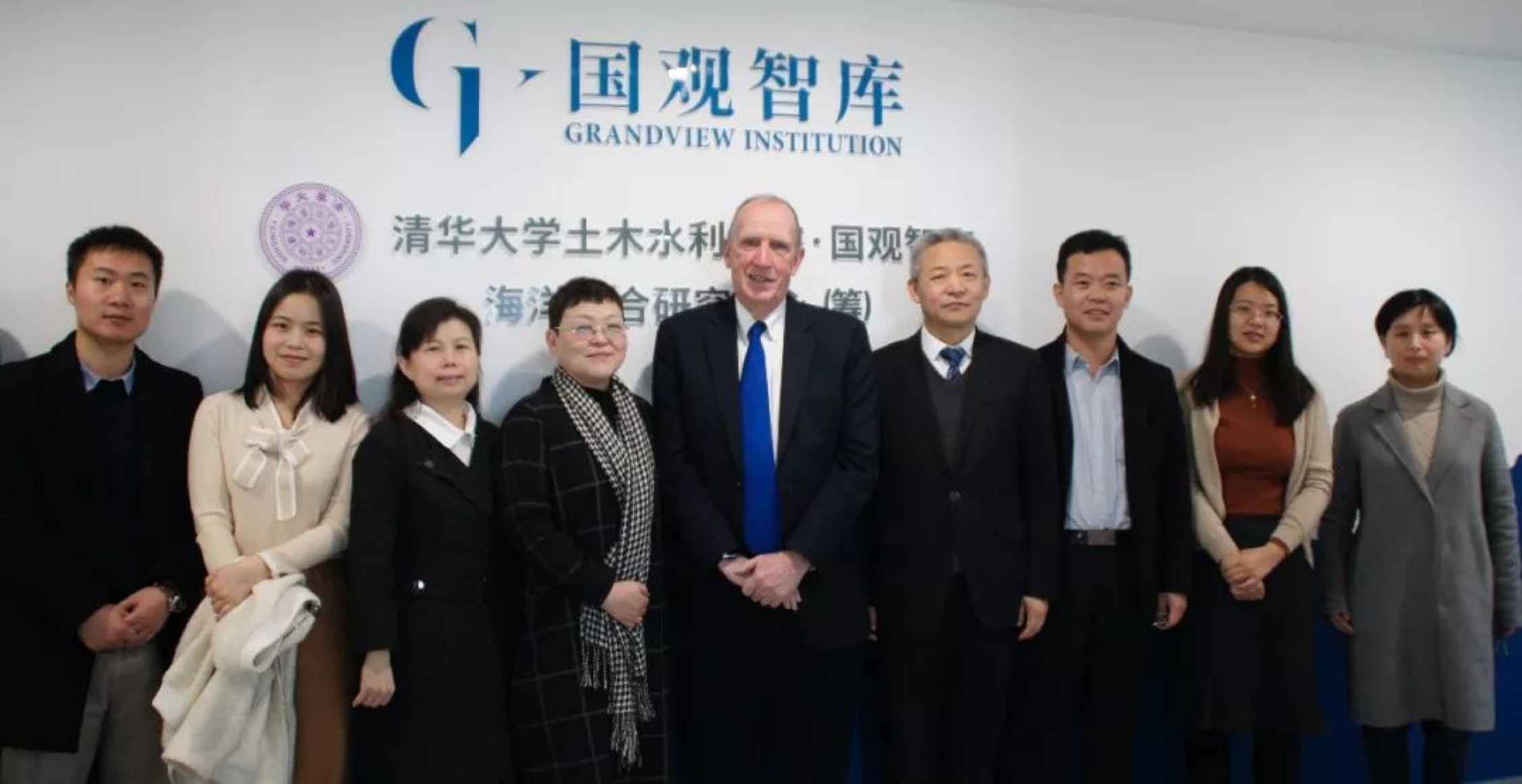 Dr. James Randall, Chair of the Executive Committee, Institute of Island Studies, UPEI. and the Co-Chair in Island Studies and Sustainability United Nations Educational, Scientific, and Cultural Organization (UNESCO). He presented four development models of island economy, as well as the influence of countries, sub-nationals, supranational organizations and China in island research. 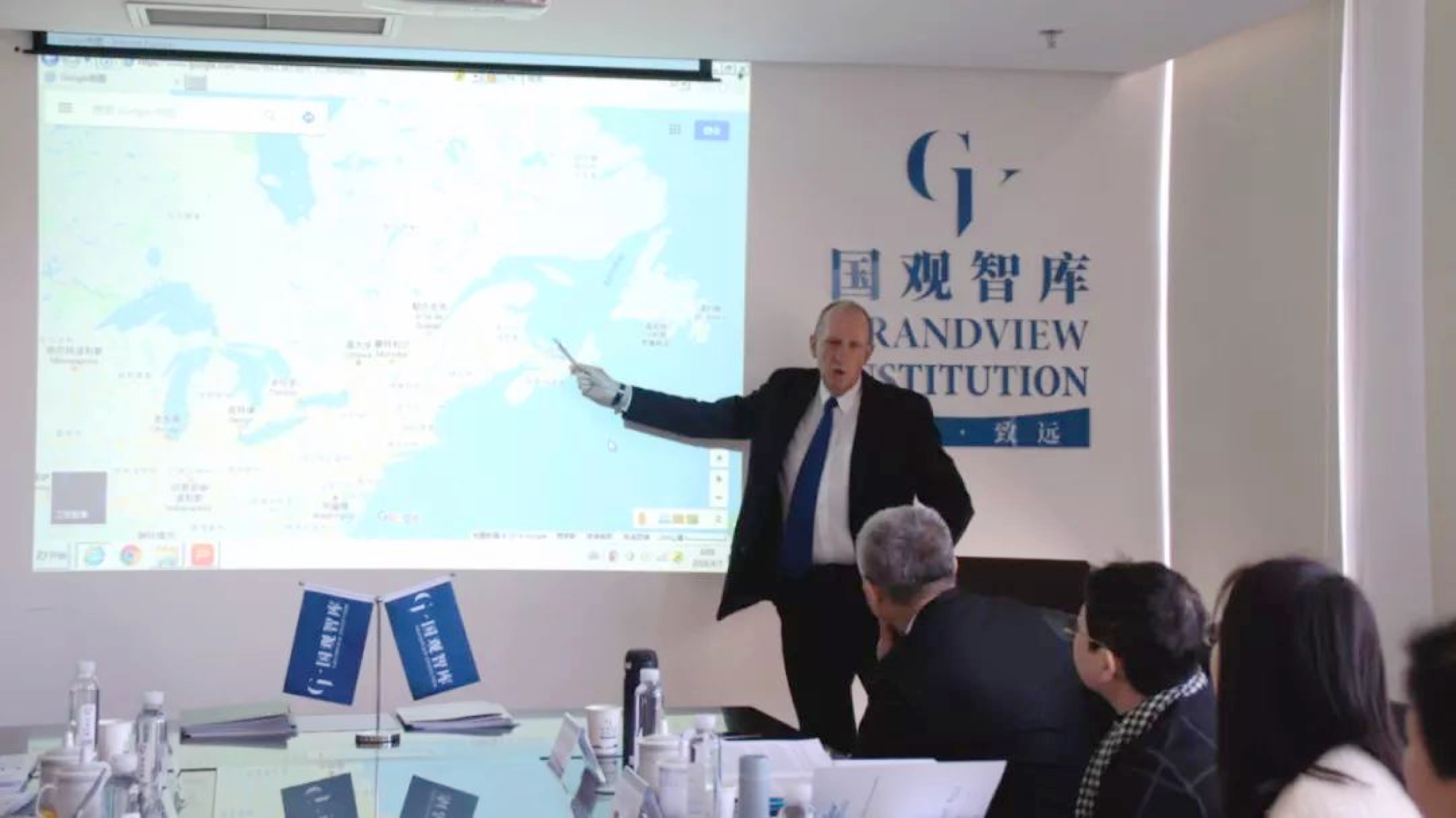 Professor Pang Zhongying provides a series of ideas and actions put forward by China as a positive path to solve the ‘Tragedy of the Commons’ in global ocean governance. He believes that China proposes to build a global marine fate community and marine partnership, to solve ocean problems through the establishment of bilateral, multilateral, regional, global and other types of cooperation. In today’s international system, China is becoming the most active force for global governance, not only deeply participating in global governance, but even playing a leading role. 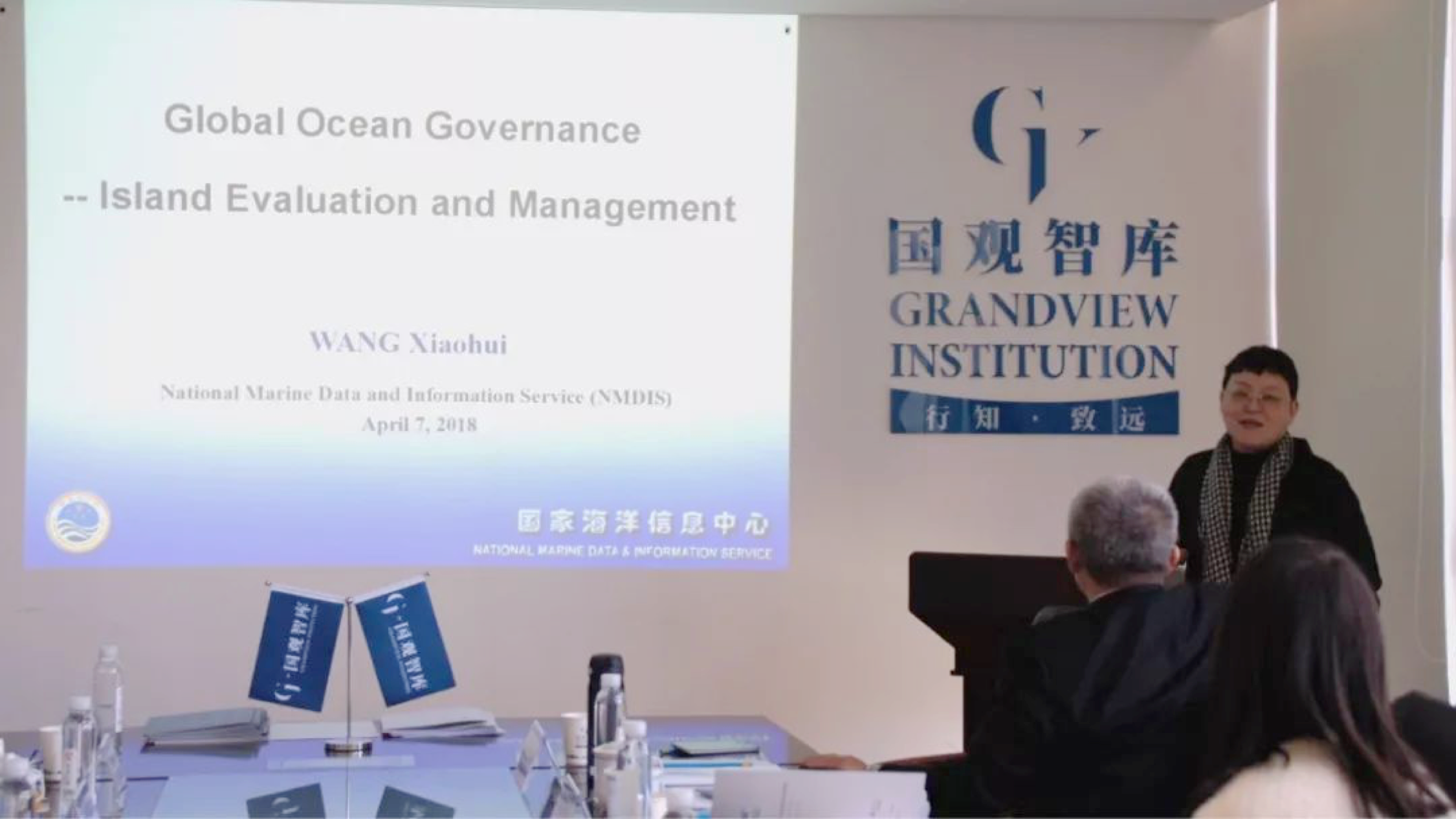 Wang Xiaohui, chief engineer of the National Marine Data and Information Service, based on years of experience in blue economy research, shared the concept of blue economy and global ocean governance with the guests, and introduced the island ecological and development assessment system by taking island governance as an example.

Wang Xiaohui proposed that the blue economy is an economic model derived from the openness, mobility, complexity, multi-level and diversity of the ocean. It also has the market value of marine economic activities, non-market value of marine ecosystem services, as well as the ocean governance balanced between them. She also analyzes the relationship between the island economy, the blue economy, and the global ocean governance, from perspective of eight elements of ‘Good Governance’ and the three principles of ocean governance, the three circles and a standard. The key points and breakthroughs of the current global marine sustainable development are islands governance. 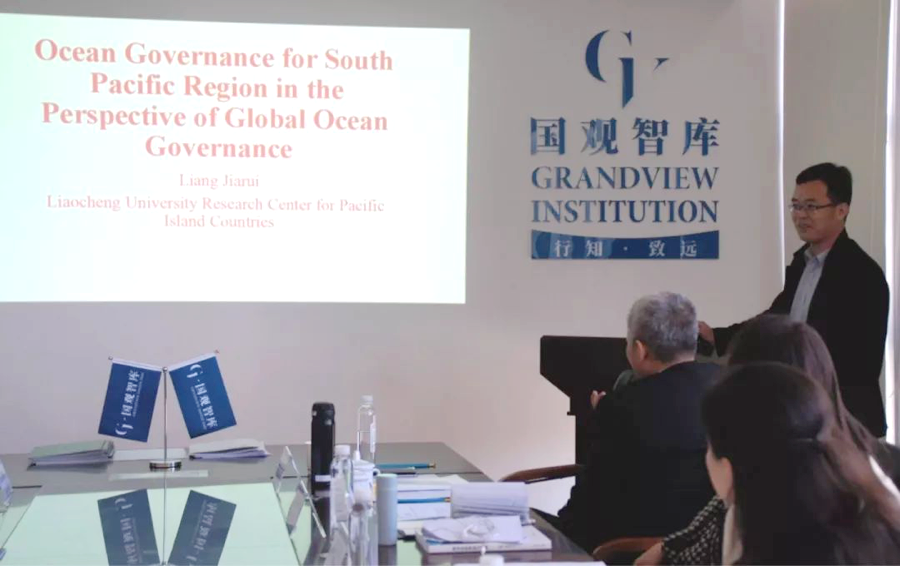 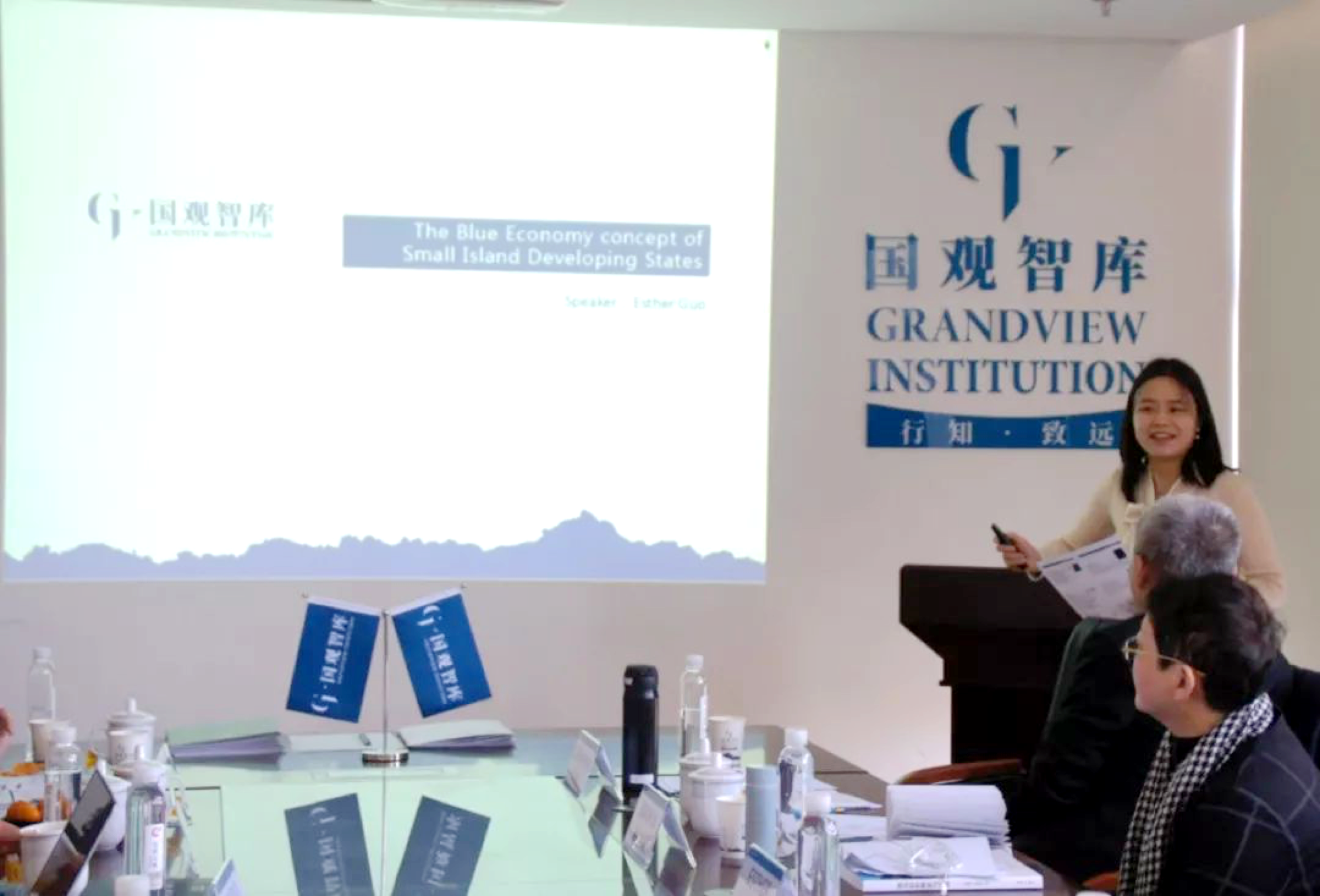 Guo Danfeng, Research Associate of Grandview Institution, analyzed the concept and pathway of blue economy in small island developing countries. During her long-term follow-up study, she found that the marine economy is not only the most important component of the national economy of small island countries, but also the key to drive terrestrial economy development. Therefore, for developing small island countries, the blue economy is an inevitable stage for its sustainable marine development and a core concern in global ocean governance.

Dr. Guo used the Small Island Country Retrieval Database established by the Grandview Institution, to conduct a structured analysis of the social opinions and marine activities in small island countries. Small island countries have special appeals for the blue economy and sustainable development. In their view, the Blue Economy has far more connotations than the Marine Economy, because Blue Economy model provides small island developing countries with a sustainable development framework of accessing, developing and sharing marine resource benefits equally. In addition, unlike the Blue Economy concept in developed countries, in small islands they state places more emphasis on inter-state equality, social equity and inclusive growth. 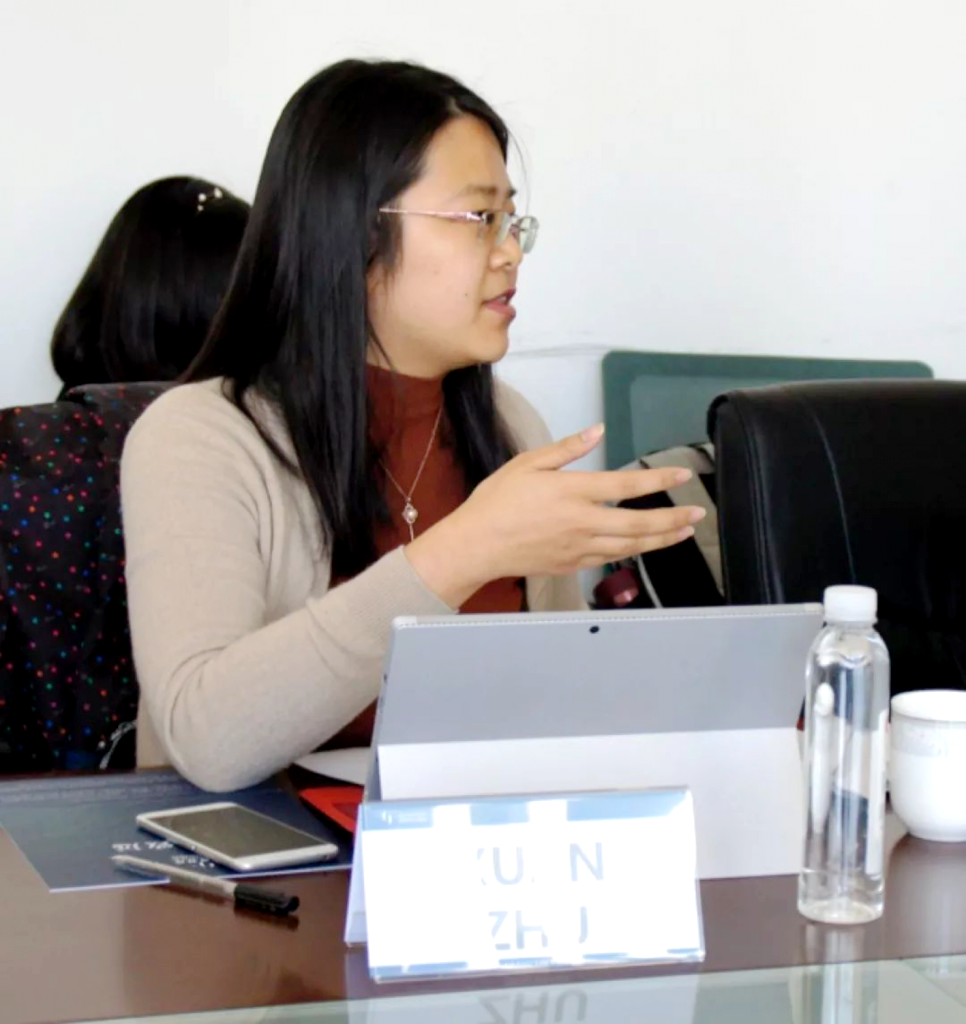 In the discussion session, relevant representatives and guests from national marine related management institutions, university scientific research institutions, and international organizations expressed their views on the theme. Zhu Xuan, assistant researcher of the China Institute for Marine Affairs, said that Professor Randall’s ‘negotiating ability’ of the small island countries is significance. The superb negotiation skills and techniques have helped the small island countries gain the attention and support of the international community. At the UN Ocean Conference held in June last year, a quantity of countries and international organizations submitted their commitments to promote sustainable development of the oceans according to their own wishes. Among the more than 1,400 voluntary funding commitments received by the United Nations, the highest amount is the $8 billion provided by the European Investment Bank, which supports the small island countries’ climate change response capacity project. From another perspective, it proves the issues of small islands sought-after among international ocean affairs. Zhu Xuan believes that the study global ocean governance in small island countries requires to analyze the global political interests and economic interests behind the ‘Island heat’, which is also a problem that future small island countries need to pay more attention to.